I’ll admit that I was a doubter. After participating in numerous homebrewing efforts over the years I learned that it isn’t easy, there’s a lot that can go wrong, and especially considering our lack of refined equipment I thought our first effort might not be that awesome. I was wrong. So very wrong…

To read the first part of the story (the why, how, and what went wrong while brewing)…. Click Here. 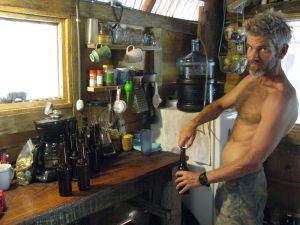 After the wort exploded, it was all up in the air. We had purchased a stick-on thermometer but it didn’t work. We were trying to keep it cool (around 72 degrees) by adding a frozen water bottle to the cooler every day, but due to the thermometer failure we were only able to measure the bath water not the actual wort.

We let it ferment in the primary fermenter for 10 days (which was probably too long) but with the polycarbonate carboy it was hard to tell if it there were still bubbles forming. At 10 days we racked it to the secondary fermenter and let it sit there for another 5 days.

Finally, we added 2/3 cup of bottling sugar per 5 gallons of wort and then bottled it up!
We gave a little taste and were pleasantly surprised at how good it was. Would it carbonate correctly? Would the bottles explode? So many worries…

A week later we started tasting and it was so good we couldn’t believe it! Very very hoppy and very very strong. We had used 9lbs of light malt extract and 6oz of hops, so strength and hoppiness were not surprising. I called it a super hoppy barley wine, Kim calls it a double imperial IPA. Either way, we both call it awesome! Mission accomplished!

We are now very inspired to get a new batch going. Our friend Jackie brought down 12 more lbs of malt extract, we have a lb of hops, and Kim is back in the US right now gathering more supplies for our next few batches. Stay tuned….