Living in Nicaragua is awesome. Warm weather, warm waves, affordable homesteading, and a simple life lived barefoot. There are however a few things we miss about the US – mexican food, fast internet, and good beer!

Luckily, Kim is an amazing cook, so we get our mexican food fix via homemade guacamole and chipotle chicken burritos. Despite many efforts to rig a fast internet system we’re still confined to the drudgery of dial-up. But, it is definitely better than nothing! Getting good beer has been much more of a challenge.

Nicaragua is much like many other warm weather locations, filled with boring hop-less lagers. The local varieties, Tona and Victoria, are definitely refreshing on a hot afternoon in the sun but they don’t satisfy our hop addictions. Kim has taken to making a tea of hop pellets and then pouring it into his Victoria for a little hop infusion. He claims it’s better, but I don’t notice enough improvement to be satisfied.
The solution : homebrewing!

We stopped by South Bay Brewing in So Cal on our last trip home and picked up 9 lbs of liquid malt extract, 6oz of Amarillo, Cascade, and Centennial hops, dry Ale yeast, and a few other supplies and smuggled them down in our luggage. 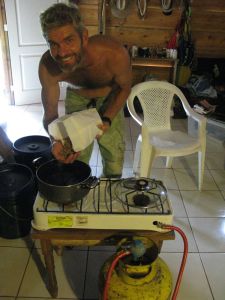 We searched the marketplace and our friends’ kitchens for a big enough brew kettle but could only come up with a 3 gallon pot. We used a 5 gal polycarbonate water jug as our carboy – purchased complete with 5 gal of purified water. 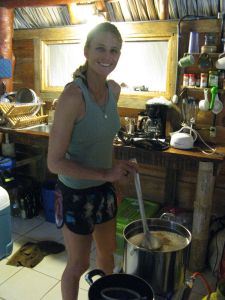 We came up with a recipe for a strong hoppy IPA we’re calling “Die Vicky IPA” after our “death to Victoria” homebrewing battle cry! 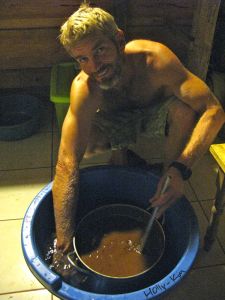 Chilling the wort as quickly as possible is important in homebrewing. We don’t have a fancy wort-chiller (yet!) so we dunked the hot wort pot in cool water baths repeatedly until the temp dropped enough to transfer the wort into the carboy and then pitch the yeast.

To keep the wort at a cool 72 degrees we needed a cooler that would comfortably fit a carboy. Luckily we had picked one up on our last trip to the US. It is the perfect size!

About 14 hours after pitching the yeast, the wort started foaming aggressively. Kim installed a bottle to catch the foam and funk coming out and we were both impressed with the rate of foamy funk production.

A few hours later while enjoying a cup of passionfruit honey mead on the porch, we heard a big “thud” that sounded like we’d caught another rat in the trap. We looked, but the trap was empty and wondered what had made the sound. 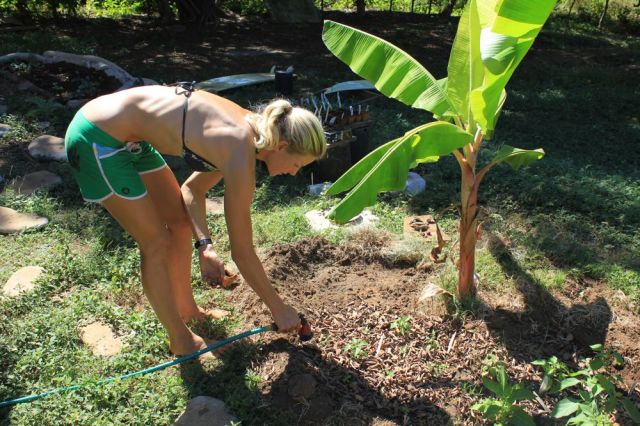 Later as I was out watering the garden, Kim yells at me from inside,
“Babe, the wort exploded!”

Apparently, the hose clogged, the pressure built up, and then “bam!” hoppy sludge everywhere! Luckily the mess was contained in the cooler. Kim cleaned it up, un-clogged the hose, and now that the violent foaming has slowed we think it’s unlikely it will happen again.

Can’t wait to bottle it and try our first batch in a few weeks.

This entry was posted in Eat drink and be merry and tagged DIY, good beer, homebrewing, nicaragua. Bookmark the permalink.

2 Responses to Homebrewing in Nicaragua