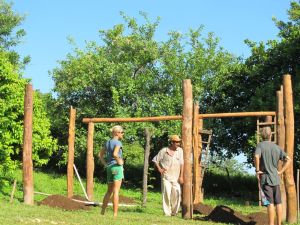 The house progresses rapidly. It’s amazing how quickly the eucalyptus posts can be assembled into home shape.
Our nine supporting pillars were bought, cut, delivered, and cemented into place within four days.

For the rest of the roof structure we needed thinner diameter eucalyptus and drove a few Kms down the main highway towards Chinandega to an enormous eucalyptus plantation totaling 300 – 600 acres depending on whom you asked. The jefe wasn’t around despite the fact that he said he’d be there at 9am. We waited from 9:30am to about 11am before we finally heard a motorbike roaring up through the quiet. Off stepped a very smiley guy in a long sleeve, pink, buttoned up shirt, fancy leather shoes, and a dark black dyed hairdo. 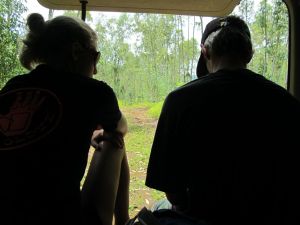 waiting for the jefe...

Our main man Orlando had already walked through the plantation and marked the trees he needed so as soon as the jefe showed up the chainsaw went to work. Mr. jefe asked if we’d seen the hilltop and then hardly waiting for an answer started leading us upwards. When we reached the base of the rocky summit he said, “It’s a race” and charged up the steep trail at full speed. He won of course, there was no room to pass him on the trail, and when he got to the top triumphant he asked how old we were then revealed that he was 50 and the secret to health was drinking a lot of fresh natural juice daily – that and his relationship with Dios. 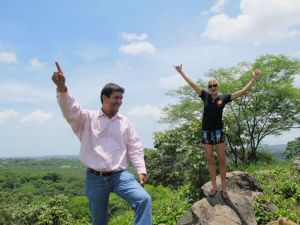 Mountain top with the jefe

“I’m a Christian,” he said, then waited for us to also profess our love for Christ. “Oh yes, of course we are too,” I replied. I figured it was the best answer but it did not stop him from preaching a bit. I suppose it was appropriate to hear a little sermon on the mount, so I nodded and smiled and enjoyed the view. From the top you could see the distant city of Chinandega and the outer reef at Asseradores, with a multitude of soft-looking eucalyptus treetops below, slow dancing with the breeze.

the view from the top

After the Christ talk he explained his plan to eventually build a hotel for tourists up there, starting with a big rancho and swimming pool. He was just waiting for his kids to finish their university training and for a little more capital to get it started. That led to the political discussion.

First religion, then politics. It’s interesting to get the opinions of relatively wealthy educated Nicaraguans on the topic of Daniel Ortega. He said he’d fought with the Sandinistas during the war in the 80s, but after Daniel took power he disagreed with the policies and began supporting the other side. I asked him about the upcoming November elections. (Nicaraguan presidents get 5-year terms and are allowed to hold office more than once but not sequentially. Daniel used creative tactics to change the constitution allowing presidents back to back terms, and is now running for the top office again. The people will decide November 6th.)

Like most other educated people I’ve polled he said that Daniel will win fairly or steal the election (as he stole the mayoral offices elections in 2009), and will remain president for another five years regardless. He told me that while he doesn’t agree with those tactics, he doesn’t mind Daniel. “All politicians are corrupt,” he said, “Daniel is no different. But Daniel gives roofs to the poor, fixes the roads, builds schools, and supports hospitals. He has done more good work in the last five years than any of the presidents before him. When he was a young man with no money he took land from the rich. Now he is a rich man with a lot of rich friends. He knows that Nicaragua needs business and foreign investment in order to improve. He’s not redistributing land anymore. Nicaragua is a good place to do business.” 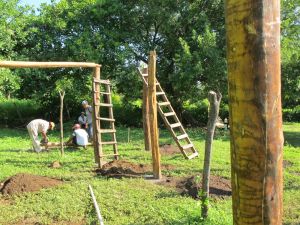 With that we cruised back down to tree level, paid him 4,040 Cords (about $184 US) and gave 800 Cords ($36 US) to the big truck driver who would deliver the wood to the construction site. So, about a week into construction with all the materials for the main structure pillars and roof beams we’ve spent 10,038 Codobas or about $456 US (not counting labor).

making sure it's level

our man Orlando has the most awesome mustache!

a careful machete pass as the roof takes shape

And then we went surfing right out front… 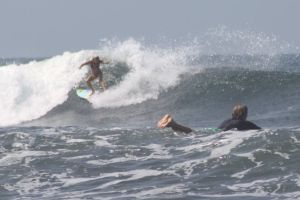